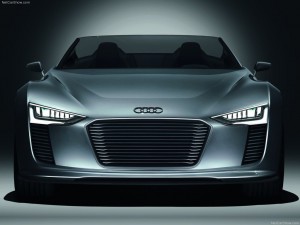 The Audi e-tron Spyder features what is without a doubt the most advanced and simultaneously the most consistent evolution of the current Audi design language, while also providing initial hints at the design language of future Audi sports cars. It reinterprets the most important design elements that already characterized the previous e-tron concept vehicles. This also ensures the necessary formal differentiation to the purely electric-powered Audi e-tron shown at the 2010 New York Auto Show. 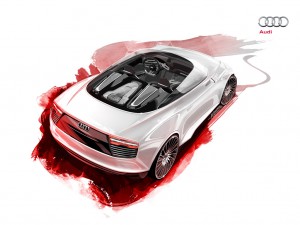 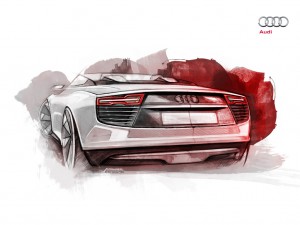 Interior
Visual and functional references to the fundamental concept of lightweight construction characterize the purist interior design. They establish a connection between proven Audi genes and new formal hallmarks. Typical for the Audi design idiom is the reduction of the architecture, controls and information output to the essentials in favor of a tidy overall impression. 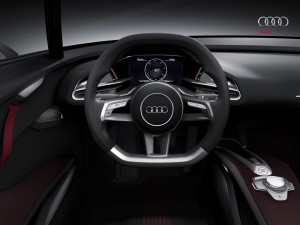 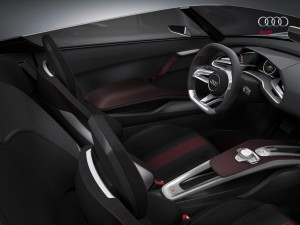 The slim dash has a curve that extends laterally into the door panels. With no need to allow for a transmission, shifter and cardan tunnel, the designers again took advantage of the opportunity to create a particularly slim and lightweight center tunnel and convex, arching center console for the e-tron Spyder with hybrid drive. The only control element other than that of the MMI is the flush-mounted selector lever for the automatic transmission, which extends upward from the tunnel when the vehicle is started.

ASF Body
Systematic lightweight construction is a crucial prerequisite for efficiency and range, while also being the primary foundation for exhilarating driving dynamics. The Audi development engineers drew on the core competence of the company for the Audi e-tron Spyder. The body structure is based on Audi Space Frame (ASF) technology and was realized as a hybrid construction, with the hood and numerous aerodynamic components made of carbon. 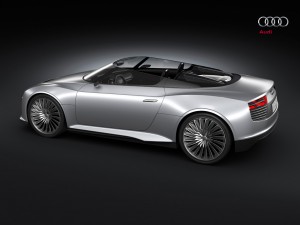 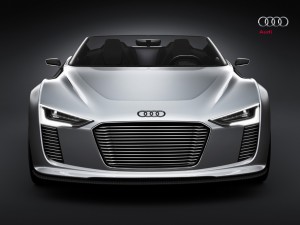 Engines and transmissions
Audi has long proven the perfect synthesis between a highly advanced sports car and TDI technology. With the TT, Audi become one of the first manufacturers anywhere in the world to successfully bring a diesel sports car to market, a decade after the Audi Cabriolet paved the way for diesel engines in this segment. And the Audi R8 TDI Le Mans concept car was the first supercar to be fitted with a twelve-cylinder diesel engine with 500 hp and 1,000 Newton meters (737.56 lb-ft) of torque.

The Audi e-tron Spyder also draws on this recipe for success – albeit in a revolutionary new combination. This marks the first use of a new generation of the six-cylinder, 3.0 TDI that breathes through two turbochargers and produces 221 kW (300 hp). That is another 50 hp more than the previous stage, which debuted a few months ago in the new Audi A8. 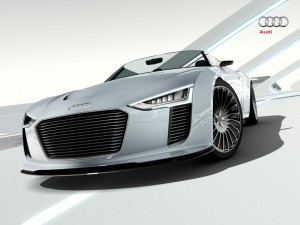 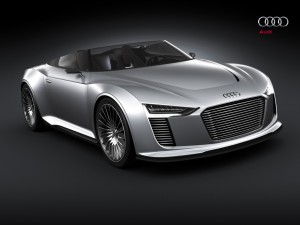 Peak torque of 650 Newton meters (479.42 lb-ft) is unusually high, even in the sports car segment. The mid-mounted, longitudinal 3.0 TDI engine drives the rear wheels via a seven-speed dual-clutch transmission.

Another innovation is the coupling of the TDI with the electric drive of the front axle. Two asynchronous electric motors with a total output of 64 kilowatt (88 hp) and peak torque of 352 Newton meters (259.62 lb-ft) combine with the 3.0 TDI to give the Audi e-tron Spyder the performance of a high-performance sports car. It accelerates from 0 to 100 km/h (62.14 mph) in 4.4 seconds. Top speed is electronically governed at 250 km/h (155.34 mph).

Chassis
The normal distribution of the tractive power is clearly biased toward the rear axle in accordance with the weight distribution of the e-tron Spyder and the dynamic shift in axle load during acceleration. Similar to with a pure mid-engine sports car, roughly 75 percent of the torque goes to the rear and 25 percent to the front. If an axle slips, this balance can be varied thanks to the central control of the entire drive system in combination with the ESP. The hybrid vehicle from Audi thus enjoys all of the advantages of quattro technology.

The combination of the mid-mounted TDI engine and the two electric motors at the front axle also make it possible to intelligently control the lateral dynamics of the e-tron.