The BMW Group with its BMW i is trying to rewrite the concept of individual mobility. At the Frankfurt Motor Show (IAA) that is going to start at the 15th of this month, the BMW i brand is going to present two very special concept vehicles: the BMW i3 Concept, nicknamed as the Mega-city Vehicle which will be presented as the BMW’s first production vehicle to be powered by pure electricity and the BMW i8 Concept which will be presented as member of the latest generation sports car that represents progressive, intelligent and innovative technology. 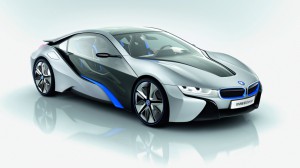 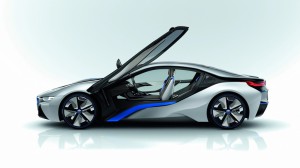 The BMW i8 concept displays a dynamic sports car figure with its striking front end. The detailed lines made along its sides give a strong sense of powering forward even when the vehicle is standing still.  The doors of BMW i8 Concept swings upwards and gives a sensation of wings moving upwards which undoubtedly provides an emotional and sporting appeal to the car. Similar to the front, the rear side of the car is also low, horizontal and sculptural in design. The silver colored clear cut lines extending out to the sides of the BMW i8 gives a particular prominence to the overall looks of the car. 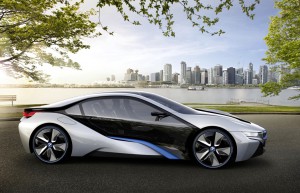 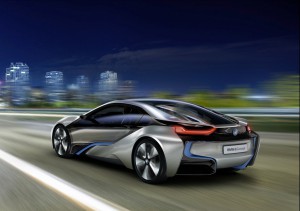 The interior of the BMW i8 also showcases a sporting character of the car. Giving out a total driver focused environment unlike ever before, the BMW Group through this concept car has tried to fully immerse the driver into the unique driving experience. The doors and the roof of the BMW i8 Concept are made out of transparent material and tend to merge into one another.  The purpose-built driver’s position in the BMW i8 is geared squarely towards the person at the wheel and gives an ideal access to all the information and controls placed in the car. Also the 3-D displays in the vehicle are crystal clear and flash up the relevant information for the driving situation at will.

There are three different levels in the car, each of which being colored in a different color. This indicates the different functions each level is for. The first level which is the outer layer is white colored and forms the supporting structure for all the interior parts. The second is the inner layer which is function oriented, features seat surfaces & storage areas and the third level which is black in color is placed between the inner and outer layer. This level includes the technical components creates a visual link between the instrument panel, steering column, CID (central Information Display) and controls. Added to all these is a 2+2-seats which offers enough space for four people. 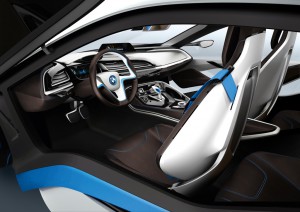 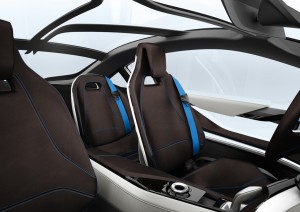 BMW i8 Concept is offered with option for two different drive trains, one being the electric motor and the other being the internal combustion engine that can be used together or separate. The vehicle can reach a speed from 0-60 mph in just 5 seconds and can reach a top speed of 155mph. The electric motors in the i8 drives the front axle, whereas the rear axle is driven by a 220 horse power turbocharged 3 cylinder petrol engine that develops about 221 lb-ft of torque. The i8 has a fuel consumption of 3 liters per 100 kilometers which is more than any other vehicle powered by an IC engine giving similar performance.

The price of the BMW i8 concept  is not set as it is just a concept version of the production i8. The production version of the vehicle is expected to be revealed sometime in 2013. BMW i8 Concept can face competition with the yet to be released electric version of Audi R8, Mercedes SLS AMG E-Cell.