Buick the luxury brand of General Motors (GM) is going to release the all new Buick Regal GS which will come into the market later this year. Buick had released their last GS model in the year 2004, which is powered by a 3.8 liter L67 Series V6 supercharged engine that produced some 240 horse power and 280 lb-ft of torque.  The new Regal GS comes as a result of Buick’s constant urge to get greater horsepower as well as better fuel economy. 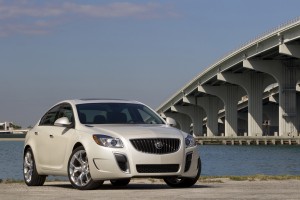 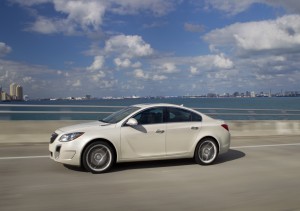 Exterior of Buick Regal GS looks unique, thanks to the vertical air intake slots and the grills. A fine satin metallic finish has been given to the grilles, trapezoidal exhaust outlets and rear spoiler which further enhances the overall appearance of the car. Buick Regal GS is low in height as compared to the other models and is fitted with a 19 inch, 5-twin spoke alloy wheels. The GS is also equipped with a four wheel independent suspension with HiPerStrut (High Performance Strut) front suspension design. This unique suspension design minimizes the torque steer and maximizes the contact between the tires and the road while cornering. A standard StabiliTrack electronic stability control with integrated full speed traction control as well as big four-piston Brembo front calipers are used as a part of large four-wheel disc brake system that gives the braking power to the vehicle. 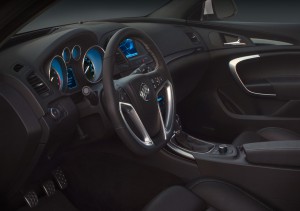 The interior of the Buick Regal GS is provided with a flat bottom sport steering wheel and metal sport pedals which is inspired by the interiors of the racing cars. The seats of the driver as well as the front passenger which is leather covered are 12-way power adjustable and are also provided with the option to be heated. Some of the standard features the car includes are the push button start, leather wrapped steering wheel, metal sport pedals, and a Harman Kardon premium 336 watt, 5.1 Matrix Surround Sound system with nine total speakers. 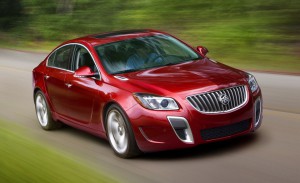 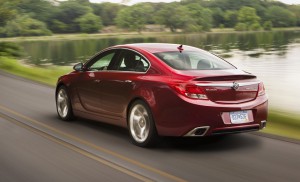 Buick Regal GS 2012 is powered by the 2.0 Liter Ecotec direct-injection turbocharged four cylinder engine. Also the Ecotec engine has VVT, crankshaft which is steel forged, a twin scroll design turbocharger and an efficient intercooler system. Though it was earlier predicted that the Buick Regal GS would be delivering only 255HP, it finally came out from the SAE- certification that the car delivers 270 HP. 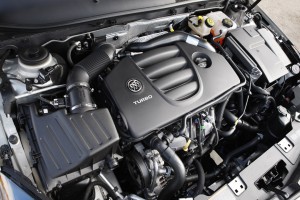 The peak torque for the vehicle is achieved at 2,400 rpm however 95% of it is achieved at 2300 and 4900 rpm. Regal GS achieves 0-60mph in only 6.7 seconds. Presently the Ecotec engine is assembled to a standard six six-speed manual transmission, however later a six speed automatic version is also be available. 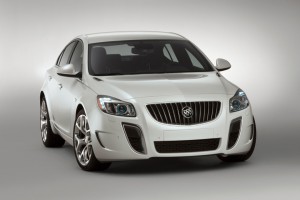 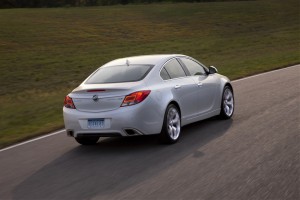 The cost of the Buick Regal GS will start from $35,310 and that includes a 860 dollar destination charge. This car will be competing against the Acura TSX, Audi A4 S-Line Sport, and Lexus IS 250.