Honda City is a subcompact or sedan car built by the Japanese automobile manufacturer, Honda since 1981. The car has seen a lot of changes in its design pattern since its launch, with the latest one having  been designed with perfect blend of amazing styling, cutting edge technology and advanced safety. The car has been highly successful in the Indian market and many asian countries. However, lately this car is also  being sold outside Asia in countries like Latin America and Australia.

The new City has lots of things going for it. It has a new engine, new futuristic design, and many new features. Honda City’s new look is a stunner. The ‘Arrow Shot Form’ design is very much liked by car lovers.

It has a streamlined grill, sharp headlights, and a shortened rear end that give the car a sporty look. This car is available in four variants : namely E MT, S MT and V MT which have manual gears and the V AT which is the automatic version. The E variant was launched recently based on customer feedback asking for changes to the interior colour and the cost. 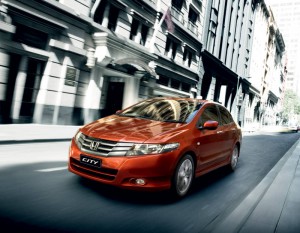 Design And Comfort
The refined aero-dynamics of Honda City heighten its presence wherever it goes. The new car is longer, wider and sturdier as compared to its previous model. The height of the new City has been lowered by 15 mm, with ground clearance remaining the same. The sleeker and sturdier body shape is hard to resist. Comfort has always been a priority for automobiles manufactured by Honda and this car is no exception. The increased cabin space of the new Honda City offers a luxurious ride for five people. 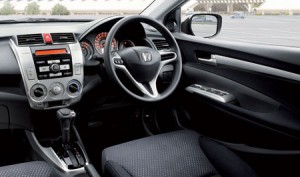 The stylish interiors of new Honda City has a trendy meter design. The color contrast of the dual-toned dashboard is soothing for the eyes. The car also features advanced integrated audio system. It boasts of featuring world’s first car audio that offers its users the liberty to integrate it with any of the newer technologies like iPOD, MP3player, USB Memory, and cell phone with MP3 Player. The audio system comes with a remote control and its controls are mounted on the steering as well.

Ride And Handling
Riding is a different experience when it comes to the new Honda City. The engine of the car has been engineered at its best, to ensure effortless driving. The control of the automobile is solely in the driver’s hands, thanks to its 5-speed automatic transmission, with paddle shift. A comfortable start is facilitated by its swift responsiveness. While its stress-free acceleration enables you to cruise along the silky-smooth highways effortlessly, the front and rear suspension provide supple riding comfort. 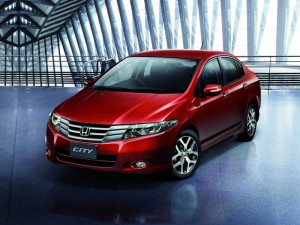