The Jaguar C-X75 concept is both a celebration of 75 years of iconic Jaguar design and a look into the future of automotive technology. Designed as a range-extended electric two-seater supercar, it explores the outer limits of both performance and sustainability. With plug-in capability the car can achieve a zero tailpipe emissions range of 110km (68 miles). 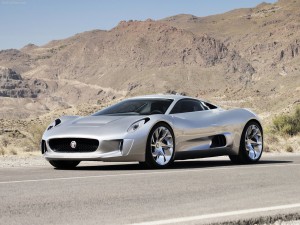 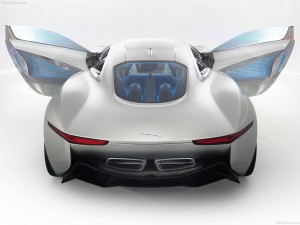 Jaguar has unveiled its C-X75 Concept which picks up where the XJ220 left off. The vehicle uses an advanced powertrain that mixes lithium-ion batteries and electric motors with two gasoline turbine generators (80,000 rpm) which recharge the battery pack.  The Jaguar C-X75 uses four 195 hp electric motors (one for each wheel) — together, the system produces 778 hp and a whopping 1,180 lb-ft of torque. The twin gas turbine generators combine to produce 188 hp and can recharge the battery pack or provide supplementary power to the four electric motors in “Track Mode”.

Jaguar says that the C-X75 can travel a total of 68 miles on battery power alone, or up to 560 miles when the electric portion of the powertrain works in conjunction with the twin gas turbines. When it comes to performance, Jaguar claims that the C-X75 can scoot to 60 mph in just 3.4 seconds and reach a top speed of 205 mph. However, don’t expect the all-electric or “range extended” figures to hold up when trying to achieves those performance figures.

As much as we would like to see a production version of the Jaguar C-X75 reach showroom complete with its exotic gas turbine generators, it’s more of a design study than a forerunner for a production version. Styling cues from the C-X75 are likely to show up in “lesser” Jaguar models including the next generation XK.