The Jaguar XKR-S Convertible is the most powerful, fastest and costliest production car ever from the British car manufacturer. Earlier this year at the LA Auto Show, the XKR-S convertible had caused a sensation along with the concept Jaguar CX-16. This car is a successor to the XKR-S coupe model which is the pinnacle of Jaguar sporting range. The convertible XKR-S offers the qualities like that of the coupe while offering driver and passenger a heightened connection with their surroundings.

On the outside the Jaguar XKR-S Convertible gets more aggressive visual package with unique bumpers, twin nacelles, carbon fibre splitter and lower spoiler in the front. On the top, there’s a triple-lined fabric roof that can be automatically raised or lowered in about 20 second time at a speed up to 15mph. Extended side sills accentuate the car’s ground-hugging contours, and a unique rear wing with a carbon fiber inlay and distinctive rear apron with a carbon fiber rear diffuser balances front and rear lift. Overall the car looks spectacular, hood up or down. 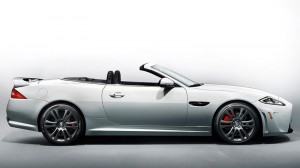 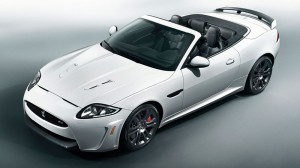 As the fabric roof comes down, one can see the sporty interiors of the Jaguar XKR-S Convertible. Exclusive to the XKR-S models, this one too gets carbon-leather trimmed Jaguar Performance seats with integrated head rests, racing harness cut-outs with increased side bolster support to hold driver and passenger securely during high speed cornering as well as 16 way adjustable heated seats. The three-spoke leather-wrapped heated steering wheel is equipped with multifunction keys and Jaguar-marked stainless steel pedals. 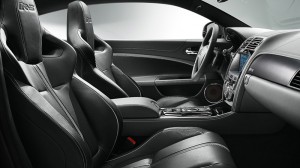 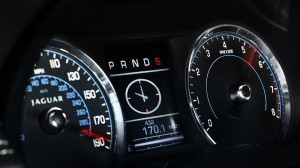 The Jaguar XKR-S convertible is powered by 5.0 Liter supercharged V8 engine producing 550 hp and 502 lb-ft of torque between 2500-5500 rpm. Also the V engine gets twin intercooler which makes it 20 percent more efficient thermodynamically than its predecessor. The car hits 62 mph at 4.4 seconds while 100 mph is reached in 8.7 seconds. The top speed is limited to 186 mph (300 km/hr), which is same as that of the RS- Coupe. 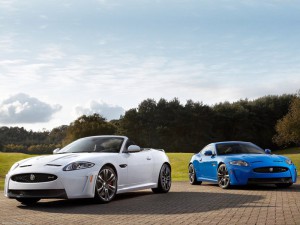 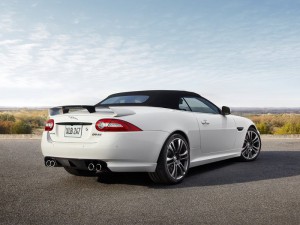 Being one of the most powerful car from Jaguar, one should not expect it to be cheap. As this Jaguar XKR-S costs a mammoth £103,000. Some of the cars competing against this one can be Aston Martin Vantage, Ferrari 458 Spider, and 2013 Corvette 427.