Lamborghini has officially launched the Aventador J at the 2012 Geneva Motor Show, but not in the concept form as expected earlier. This car will be a fully functional sports car built for driving on the roads. Lamborghini had released a teaser video about the Aventador J two days ahead of the Geneva Motor Show, leading everyone to believe that the company is planning for some new concept car. But yesterday’s launch has finally confirmed what the company was upto. 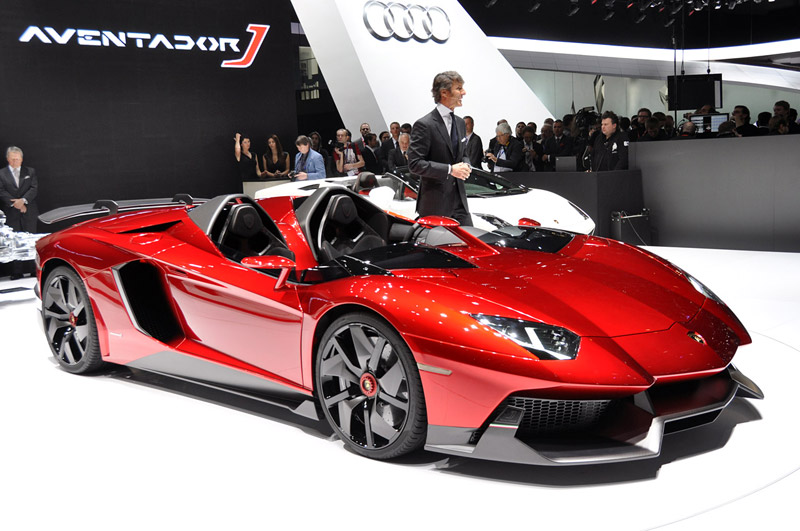 The Lamborghini Aventador J is based on the standard Aventador LP700-4 from which the roof and the windshield have been removed. Also the air conditioning, navigation systems and even the audio systems have been removed from the car, making it lighter than the Aventador coupe weighting 1,575kg. The car has been designed in such a manner as if the exterior and interior blend into each other to give a two-seater sports bike effect. Highest points on the Aventador J are the roll hoops behind each seats and the rear view mirror which sits on a pole protruding from the dashboard. 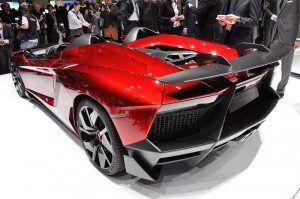 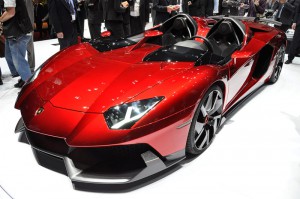 The Aventador J is made up of extremely high quality materials that also help the vehicle to attain maximum speed. The bumpers, winglets, front air scoop, and the rear diffuser are made out of carbon fibre to add aerodynamic down force and the black mesh at the rear helps to cool the giant engine.  The car is painted in a chrome red color and wheels are 20 inch on the front and 21 inch at the rear. On the inside – the seats are covered with a new carbon fiber fabric called Carbonskin. 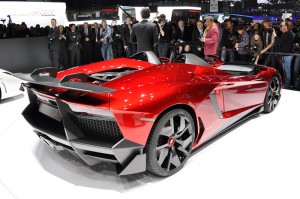 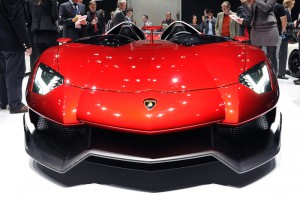 The engine of the Aventador J is same as that of the standard coupe model which is a 6.5 liter V12 engine. This is capable of delivering a total of 700 HP and 509 lb-ft of torque. Top speed of this car is 186 mph, which is a bit less than that of the standard Aventador to take into account the missing roof. The engine is paced under a unique X-shaped carbon fiber cover which leaves much of the engine on display-“a truly stunning sight,” the company claims.

Finally even though all these facts and figures about the Aventador J makes your jaw drop, the bad news is that the company has only one model of this car which is already sold to an unknown buyer at a substantial price of 2.1 million Euros ($2.6 million). So the maximum you can do to show your liking for the car is to have a poster of Aventador J sticking on the walls of your room.