The Italian supercar marquee Lamborghini have showcased their latest offering at the Beijing Motor Show  this year in the form of Urus Concept, which is a crossover from San’Agata. The company had been working on this project from a long time and wanted to launch an SUV seeing the increasing growth of this segment in the markets worldwide. The Lamborghini Urus is also an indication about the company’s intentions about expanding their line-up. 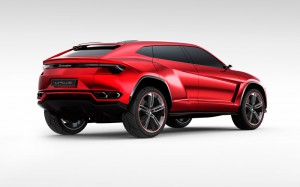 Like all the other models, the Urus also gets its name from the bull-fighting world, a species of wild bull to be more specific. A fresh design as compared to their earlier line-up, the Lamborghini Urus bears a resemblance to the Porsche Cayenne, with mean-looking headlamps and sharp supercar lifted up several inches above the ground, with a rather Land Rover like stance. The Urus is a four-door, four seater crossover powered by a V12 engine producing over 600PS, riding on 24-inch alloy wheels and comes with various features like variable ride height, permanent all-wheel drive and good on and off road capabilities. 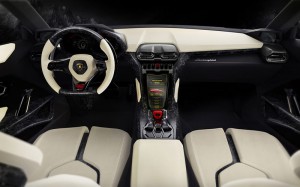 Inside the Lamborghini Urus there aren’t many controls around the wheel (only the paddle shifters), making it a very focused cabin, with a multi-function steering wheel. On the centre console, one can find an integrated touch screen which is also present at the back so that the rear passengers can control their own climate, music and likes. The seats are covered with white leather with aesthetic fragmented design that the company had earlier introduced on the Reventon. Also most of the surfaces in the car are covered with carbon fibre, to make it as light as possible.

So what do you thimk, will the Lamborghini Urus concept soon be brought into production? In all probability, yes. Lamborghini surely knows the pace at which the SUV market is growing and has brought out their offering just at the right time. The company has high hopes from this wild bull and considers it to be a high selling model of the future, promising to make it the most powerful series production SUV in the market and also at the same time making it least polluting.

7 Green Concept Cars to Drive in the Next Five Years