The 2011 Mitsubishi Outlander Sport made its debut at New York, U.S last year. Since then Mitsubishi has a crossover it can offer starting at less than $20,000. At a length of 169.1 inches, the Outlander Sport is more like a Lancer-alternative than a true compact crossover along the lines of class leaders like the Honda CR-V and Ford Escape. 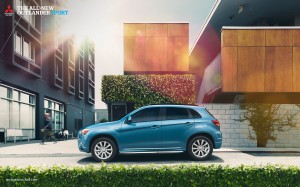 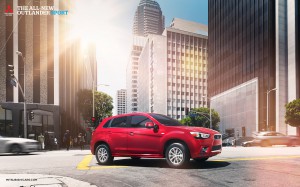 Just because the 2011 Mitsubishi Outlander Sport Outlander Sport is small doesn’t mean that the company’s new crossover is necessarily a compromised vehicle. It’s designed for city dwellers looking for a higher view of the road but will never go offroading. Mitsubishi says the Outlander Sport has a visual reference point about five inches higher than that of the Lancer.

Unlike the Lancer, though, the Outlander Sport can be had with premium options including a panoramic sunroof. It also offers a navigation system with traffic updates and a 40 GB hard drive, a 710 watt nine speaker sound system, FAST key passive entry system and Mitsu’s “super wide range HID headlamps,” which the automaker says emit 35-percent greater light output than regular HIDs. 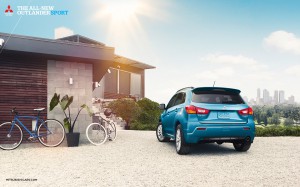 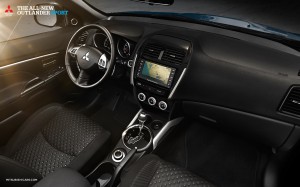 Weight is the enemy of fuel economy and performance. It also doesn’t do any favors for handling and agility. The Outlander is one of the lighter vehicles in Consumer Guide’s compact SUV class, weighing in at a svelte 3,263 pounds.

The smaller Mini Countryman is the lightest in the class at 3,208 pounds; the Jeep Liberty is the heaviest at a portly 4,222 pounds. Most competitors outweigh Outlander Sport by several hundred pounds. All weights are for the lightest 4WD model. 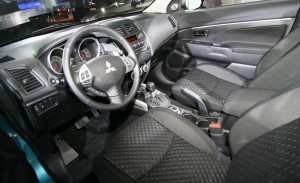 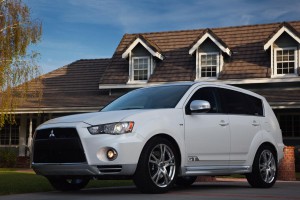 The Outlander Sport gets the second-best fuel economy in the class (based on non-hybrid vehicles with 4WD and automatic transmission) at 24 mpg city and 29 highways. Again it’s beaten by that pesky Mini Countryman with 24/31. Outlander Sport even gives the Ford Escape Hybrid (29/27) a run for its money. 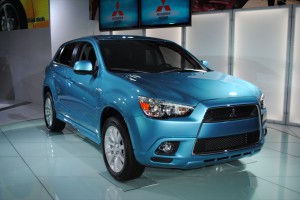 All Outlander Sports equipped with a continuously variable automatic transmission (CVT) have standard magnesium shift paddles for manual control of the transmission. Shift paddles come in handy for checking speed on downhill runs or better response on winding roads. Magnesium shift paddles are often seen on high-end sport sedans and coupes. For instance the Infiniti G37 requires an optional Sport Package to get them.

Outlander Sport has an optional panoramic glass roof panel. The glass panel doesn’t open like a sunroof, but it does have “mood lighting.” LED lights indirectly illuminate the length of the sunshade when it’s closed at night. With the sunshade retracted, the LEDs reflect their amber light across the glass panel in the dark.

Plastic fenders have several advantages over steel. Plastic doesn’t rust, it resists dings from minor accidents, and–in worst case scenarios–is more forgiving to pedestrians in collisions. Plastic is also lighter than steel, which helps keep it more fuel efficient. A typical disadvantage of plastic bodywork is the wide gap between panels left to allow for expansion with changes in temperature. Mitsubishi seems to have beaten this problem. The gaps around Mitsubishi Outlander Sport front fenders are as tight as the rest of the body.