The Acura MDX 2011 launched by Acura has surpassed SUV luxury to all new level of refinement. It has a combination of luxury which includes a room for seven and a four wheel drive comfort with its perfect handling. It has all new 3.7 litre V-6 engine which has greater compression ratio and bigger throttle body offering 300 horsepower. 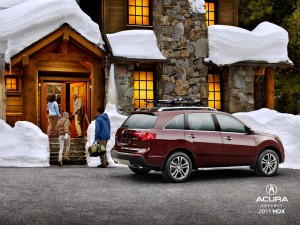 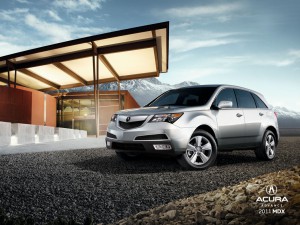 The Acura MDX 2011 is manufactured by Honda of Canada Manufacturing in Alliston, Ontario, Canada. The company has applied benchmark technology to create a new innovative luxury SUV vehicle with super handling and high performance.  The 2011 Acura MDX vehicle has been very stylish and sporty in its design along with excellent handling and high performance. Also  the vehicle provides high level of comfort in riding and the safety as usual is the priority of this vehicle in all weather conditions. 2011 Acura MDX has won the award for the best luxury SUV riding. 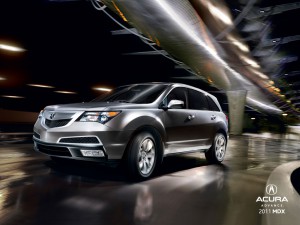 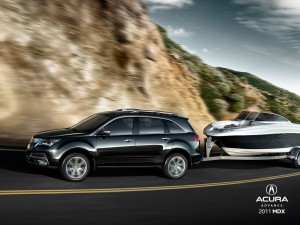 The MDX has Acura’s largest engine, that offers a remarkable combination of power, efficiency and refinement. The 3.7 liter VTEC V-6 delivers 300 hp and 365Nm of torque. The Variable Valve Timing and Electronic Lift Control (VTEC) increases high-rpm hp by opening the intake valves deeper and longer when engine speed reaches a designates rpm. The vehicle gives an estimated mileage of 16 in the city/ 21 in the highway, which when combined with a 21-gallon fuel capacity gives the MDX the potential for attaining a 400-mile or more cruising range. 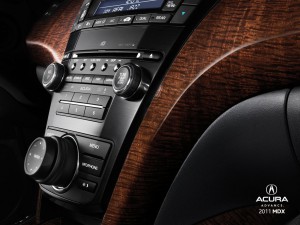 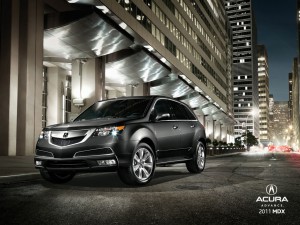 The MDX can be equipped with a blind spot information system that assists you when making lane changes. 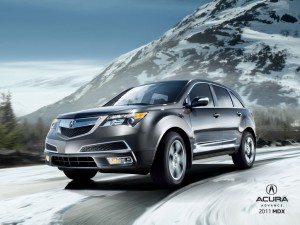 As with a conventional system, the available Adaptive Cruise Control (ACC) system allows you to set a desired speed, but it also lets you set time intervals from the car ahead of you so you can enjoy cruise control even in light traffic conditions.

Both front bucket seats in the MDX have pronounced side bolsters to provide lateral support for cornering and plenty of comfort for long drives. Advanced seat frames and power adjustment features help reduce flex in seat movement, imparting a stable and substantial feel. The driver enjoys a 10-way adjustable power seat, including a power lumbar support. The front passenger is given similar consideration with an 8-way power adjustable seat. 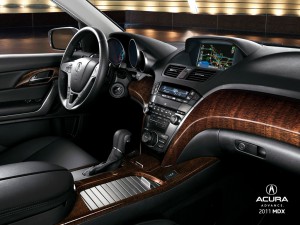 As part of its 4+3 seating design, the outboard 2nd-row seats closely mimic the front seats with pronounced side bolsters to help hold the passengers in place. For a commanding view, the cushions sit higher than the front row for a theater-seating effect. When the middle space in the second row is not occupied, a center armrest can be folded down, providing room for two arms, as well as retractable dual cup holders. In a single movement, the passenger-side 2nd-row seat will tilt and slide forward for easy access to the 3rd-row seats. 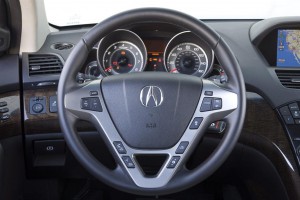 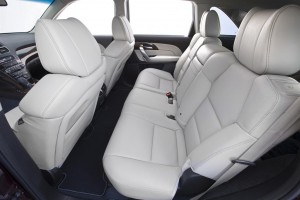 With the combination of 60/40-split 2nd-row and 50/50-split 3rd-row seatbacks, the MDX easily adapts to a variety of passenger and cargo combinations. Behind the 3rd-row seats lies 15 cubic feet of storage space that’s easily accessible though the rear hatch. The 3rd-row seatbacks can be folded flat without having to remove the headrests, raising the cargo capacity to 42.9 cubic feet. For the maximum cargo volume of over 83 cubic feet, you can fold the 60/40 split-folding 2nd-row seatbacks to create a flat-load floor in the rear. A hidden storage area under the floor is perfect for trunk items such as tools or anything you want concealed.