Hyundai Santa Fe was first unveiled in the year 2001 and since then it has been doing good especially in the European markets. The South Korean company is now ready for the launch of its third generation Santa Fe which will be known as the 2013 Hyundai Santa Fe. This new vehicle has been completely redesigned thanks to the numerous prototype sightings and even the unintended leaks that came a few months back. Though Hyundai plans to unveil this new vehicle at the New York Auto Show scheduled next month, but the Korean automaker decided to give us all a sneak peak with two pictures of the car through its Twitter account. 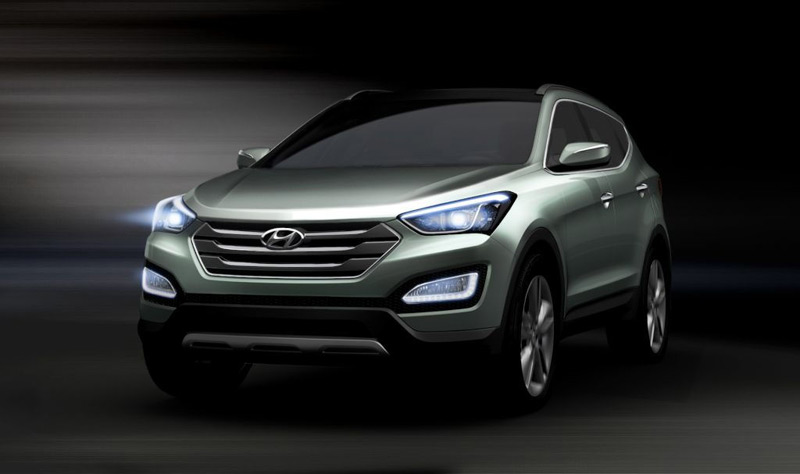 The 2013 Hyundai Santa Fe will debut the latest design language termed “Storm Edge” from Hyundai. This will be an evolution from the current “Fluidic Design” theme implemented on other Hyundai cars like the Hyundai Avante. The “Storm Edge” adds more sharper and pronounced creases to give the new Santa Fe a futuristic and urban style look. This new design adopts new hexagonal grille, three bar shiny chrome pattern, wide front and rear bumpers as well as the Xenon lights and LED fog lights.

When it comes to power, Hyundai has not disclosed any technical specifications on the 2013 Hyundai Santa Fe yet. The current version of the Hyundai Santa Fe is powered by a 2.4 liter gasoline engine and a 2.2 liter diesel engine with 4 cylinders each. So we can expect the new Santa Fe to be powered by a more powerful engine, maybe a V6 to compete against the other vehicles in the segment like the Chevrolet Equinox, Nissan Murano and Jeep Grand Cherokee.

Whatever it maybe, its believed that the 2013 Hyundai Santa Fe will be the only major reveal from the Korean automaker at the 2012 New York Auto Show. So Hyundai really needs to come up with some impressive figures for this new vehicle.