Hyundai Motor, which is the No1 South Korean car company has unveiled its first pure electric car with a goal of commencing mass production of the vehicles in 2012. The car named “BlueOn”, has its design  based on the famous  i10 hatchback and  will be powered by batteries made by SK Energy that has capacity of 16.4 kilowatts per hour. On a single charge the car can run a full stretch of 140 kilometeres and can achieve a maximum speed of 130km/hr. The price of the car has not been revealed as of now. 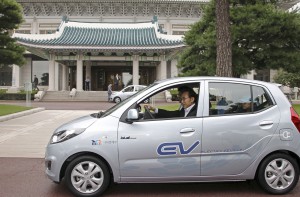 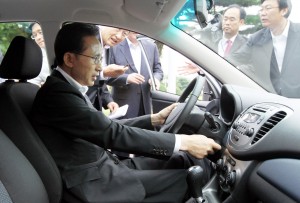 Hyundai began development of the BlueOn a little over one year ago and has invested about $34 million in the program. Thirty BlueOns will be supplied to South Korean government agencies for a two-year pilot program that begins next month at the G20 economic summit.

This little EV (Elecctric Vehicle) is equipped with a 16.4 kWh lithium-polymer battery pack. In addition, the engine-driven components were electrified so that the electric motor-driven power steering, electric water pump and regenerative brake system could be adapted to BlueOn. Furthermore, for the driver’s convenience, an advanced telematics system showing the charge status and location of recharging stations is installed. A 4.2-inch TFT LCD Supervision Cluster that provides voice guidance has also been installed.