In the 2012 Detroit Motor Show one may have seen many new and upcoming cars which made headlines throughout the world. But there was one car which made most of impact for the visitors over there. The American Automobile giant Chevrolet have tried to come up with a reality, creating a Camaro Hot Wheels concept car inspired by the 1/64- scale model of one of  the original 16 Hot Wheels car released back in 1968. It’s a dream come true for those who have played with Hot Wheels as a kid and imagined to see the car in full size. 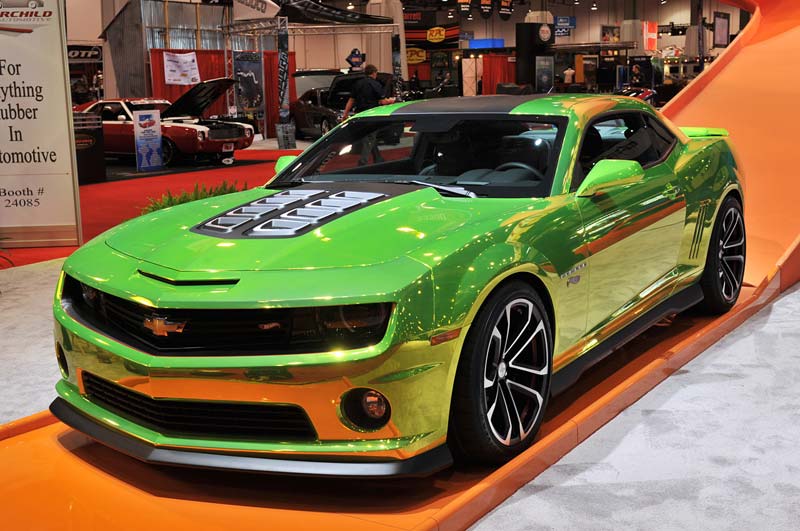 The Camaro Hot Wheels Concept project was a collaborative effort between the General Motors Design studio in Michigan and the Hot Wheels Design studio in California. The teams have tried to apply some of the distinguishing features of a 1:64 model toy car and then super-size it back to full-size making the car look dazzling with Spectraflame finish, flat-black graphics, and redline wheels. Each team sketched its own ideas of a life-size Hot Wheels Camaro, compared notes and refined their visions until the concept hit the right note for each group of designers.  Originally unveiled a few weeks back at the Specialty Equipment Market Association (SEMA) show in Las Vegas, this concept looks cool. 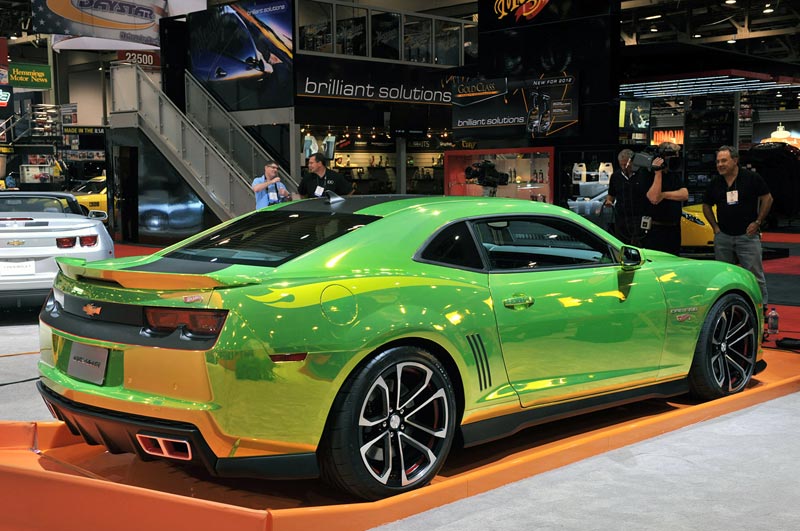 Thus in order to build the Camaro Hot Wheels Concept car the team had to essentially invent its own way to paint the car, which involved the reflective finish from Gold Touch Inc,  a liquid-metal solution in the primer, and then a green tint applied over the car in layers. Also the car has details like smoked-lens taillamps, exhaust bezels, ground effects, a ZL1 grille & rear spoiler, and a black-leather IP with Torch Red accents.

This Hot Wheels concept is powered by a 6.2-liter V8 engine and is linked to a Tremec six-speed manual transmission. Inside the car, cabin gets the Hot Wheels embroidered logos on front seatbacks, a black leather-wrapped instrument panel with Torch Red accents and a Chevrolet Accessories pedal kit. Other details include a Hot Wheels badge on the deck lid, Euro-style tail lamps with new inner smoked lends and a ZL1 rear spoiler.

Unfortunately the car will remain as a concept and will not be introduced in the market.